The phenomenon of linguistics describes the fact, that a person having attended Elementary school only and having never learned a foreign language, is able to cite quotations in different languages, without accent.

In principle, Therese spoke in the hazed state (see chapter visions) in German (respectively dialect) about things she had heard in the vision. Occasionally on her own initiative, but especially following an explicit wish of a person questening her, she quoted what she just had heard also in the original language of the event. Had she, for instance, experienced the scene "Jesus before Pilate", she could quote the Latin of the Roman soldiers. Following a vision concerning the life of St. Anthony of Padua, she reported in his native language, Portuguese. Following a vision about the life of Bernardette Soubirous of Lourdes, she talked in a Provençal dialect. The foreign language she heard and quoted most was Aramaic. Aramaic was the main everyday-language in Palestine at the time of Jesus. (Hebrew remained to be the holy language, reserved for the liturgy.)

Since Therese Neumann did not understand the language in which she heard persons speak in her visions - and by now, Prof. Wutz was sure about that -, it required great patience from her and the Professor to repeat the heard words and sentences. Concerning the method Prof. Wutz used to hear the Aramaic from her, Therese said: "In the beginning he would listen without saying a word. Only later, he tried with his questions to force me to bring forth a more plentiful vocabulary out of my memory. That meant great efforts for me, sometimes I was even unwilling to do so, but eventually I complied. ... You see, I am like a child, hearing the language, and from hearing only, without knowing when and where, I imitate the language" (Teodorowicz, p. 496). 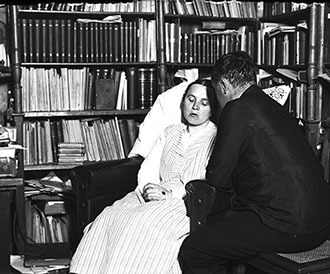 At first, nobody in Konnersreuth paid any attention to these different sounds, because nobody could interpret them. Prof. Dr. Franz X. Wutz, a university teacher of Exegesis of the Old Testament and Biblical Sciences at the Philosophical-Theological Faculty in Eichstätt, discovered the linguistic phenomenon for the first time. Just by chance, he stayed in the area and heard about the girl having visions and talking in an unknown language. At first doubting, he went to the Neumann house on a Friday, "but when some words were heard, he regognized very clearly - to his amazement - the Aramaic" (Teodorowicz, p. 493).

Henceforth, Prof. Wutz came frequently to Konnersreuth, wrote down in shorthand the quotations Therese gave in Aramaic. At home, he scrutinized his protocol and found out, that Therese not only quoted words and parts of sentences which are found in the Holy Scripture, but made supplemental statements also.

To make sure that Therese did not fake knowledge, Prof. Wutz tried "to mislead her with incorrect Hebrew words or incorrect grammatical Aramaic forms. She always rejected them as wrong. She used sometimes word constructions and syntactical forms unknown to Wutz. He disputed their correctness, until (later) he found them proven right in source texts" (Buchberger, p. 22f).