The concept is taken from the Greek word "stigma" and means "sign, brandmark", in the strict sense "pierce or stab". Theologically speaking, it circumscribes the stigmatisation to be a spontaneous appearance of the scars Jesus has suffered in his Passion (Stigmata), seen on the body of a living person, especially on hands, feet, around the heart, head, shoulders and back. Psychology sees it to be a mentally conditioned effect, Theology, to be a charismatic sign, and the Sciences have no explanation at all until now. The wounds (Stigmata) stay without festering or infection, can not be treated medically, often remain open and bleed on certain days, usually on Fridays, the day of the Passion of Jesus.

The first historically verified stigmatisation is attributed to Franz of Assisi; he lived in the 13th Century. Until the death of the Franciscan Fr. Pio von Pietrelcina, Italy, in 1968, more than 300 instances of stigmatisation are known.

Therese Neumann's stigmatisation started on March 4, 1926, first with a wound near her heart (see chapter Biography). In the following Friday-sufferings during Lent 1926, not only the range of her vision enlarged, but with each suffering more bleeding Stigmata appeared. Pastor Joseph Naber from Konnersreuth reported about Therese's condition on Good Friday 1926: " When I, together with another Priest, visited her [Therese] on Good Friday after lunch, [we] found her lying in great torture, the eyes clogged with blood, two streamlets of blood running down her cheeks, pale like a dying person. Until 3 o'clock, the Hour of Death of the Saviour, she struggled in terrible agony of death. ... During this death agony on Good Friday, she had viewed all the sufferings of the Saviour, beginning on the Mount of Olives down to Calvary, and had shared it in a very intense way, even his abandonment on the Cross. At that time, she had felt severe pain on the upper side of her hands and feet. Now, both hands and feet show kind of round, open wounds, out of them runs pure blood. Already several weeks before Easter, suddenly a longish wound broke open in the area of her heart. At times, a lot of pure blood came out of this wound. The Medical Doctor had scrutinized all these wounds" (Gerlich, p. 114, Waldsassener Grenzzeitung, April 21, 1926).

Following Good Friday in 1926, the five wounds remained open for the next 14 days. They were always wet, but the amount of bleeding varied. Her parents thought, that these suddenly new developed wounds had to be cured, and tried to achieve some improvement with household remedies. Since these did not show any result, they called the physician, Dr. Seidl, from Waldsassen. The form of the wounds surprised Dr. Seidl, especially the extend of the wound of the side, 3,5 cm long and 1 cm wide [1.38 x O.4 inch]. He prescribed an ointment. The treatment caused a severe swelling of the wounds of her hands, feet and side. Therese was seized by an almost unbearable pain, she hardly could endure it. Because of this, the parents finally removed the bandages with the ointment and as a result, the pain subsided rapidly and, eventually, disappeared. Dr. Seidl was astonished about the peculiarity of the wounds, which - as long as they were left alone - neither got infected nor purulent. "Henceforth, he refrained from all treatment, but wrapped the wounds with a bandage only" (Gerlich, p.107). Following this advice, Therese always was wearing a head-scarf and gloves with cut-off fingers to protect the scaps of the wounds of her hands. Never again occurred an infection or festering of the wounds.

The Stigmata never healed. For the rest of her life the wounds were clearly visible in the palm and on the back of her hands, and on the sole and the upper side (instep) of her feet. Until her death in 1962, the painful bleeding of the Stigmata connected with the Friday-sufferings occurred 780 times, whereas the wounds of scourging and her head wounds started to bleed during the time of Passion only.

Bishop Buchberger of Regensburg had asked Therese to stay home on Fridays, so visitors could witness her sufferings and be strengthened in their faith. Thousands of visitors witnessed her sufferings. In addition, movies confirm the visions and the bleeding Stigmata. 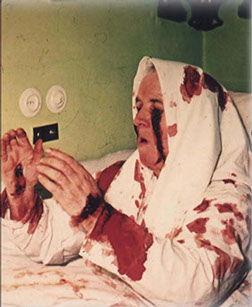 Several attempts were made to explain the Stigmata and the visions scientifically. Some tried to find the cause in an overexcited imagination or in a hypnosis, or declared the phenomenon to be a result of autosuggestion and hysteria. Confronted by someone with such a theory, Therese answered quite sternly: "Imagine, you would be an ox, would you grow horns as a result?" (Gerlich, p.323). Several Medical Doctors and Psychologists confirmed, that Therese showed no kind of any symptoms of mental abnormality (Klosa, p.70ff, p.129ff).

At first, Therese felt very uneasy about these Stigmata, in her dialect she said: "I knew nothing about Stigmata and was hoping, all this would disappear" (Gerlich, p.106). Later, after she was certain that these Stigmata were supernatural and not curable, she accepted the physical pain and - in view of mockings - the mental pain also as an sacrificial suffering.